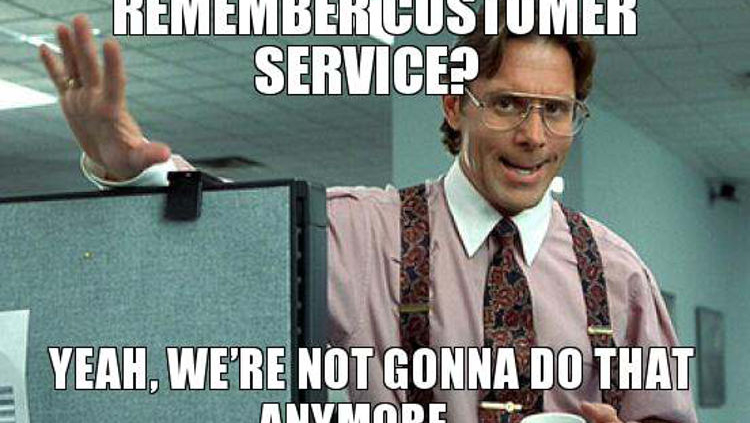 The iiNet / TPG Merger has a lot of us in the tech-world concerned. Will Internode’s customer service level drop? Will the new giant simply roll-over on privacy, as TPG has done before (iiNet fought the Dallas Buyers Club tooth and nail)? Or will this be a boon for the domestic user. Paul Budde (managing director of BuddeComm) wrote this opinion piece for Business Inspector. The original article can be found here. Image courtesy Not Always Right.

TPG’s $1.4 billion offer to acquire iiNet now stands to create a company with combined revenues of $2.3 billion, one that can aggressively pursue its quest to become a comprehensive telecoms provider in the market. However, the merger will come at a cost to the public, further reinforcing the lack of infrastructure competition in Australia.

The TPG iiNet deal is a significant moment of industry consolidation in the telco sector but the trend still has some way to go.

Buying iiNet has obvious merit for TPG. It gives the telco an entry into the NBN, courtesy of iiNet’s 60,000 Fibre-to-the-Premises customers, allows the combined entity to overtake Optus in the fixed broadband space; and gives it a vastly expanded reach into the small-to-medium enterprise market.

TPG is already strong in corporate and government, partially as a result of the PIPE Networks and AAPT businesses it bought previously. The backbone facilities from TPG will also reduce the overall operating costs for the iiNet part of the merged entity.

It is interesting to note that the deal values iiNet’s 975,000 subscribers at $1,436 a head – this is quite substantial, giving the deal a total value of $1.4 billion. TPG reported revenues of $970 million for its fiscal 2014 year and net profit of $171 million. In contrast, for the last six month period iiNet reported revenues of $547 million and net profit of $32 million.

What happens to Internode?

iiNet has been the best performing telco in relation to customer support and has assiduously built a reputation of standing up for user rights in areas like privacy and copyright infringement. Given its loyal following, it’s no surprise that TPG wants to retain the main iiNet brand. However, it will review other brands in iiNet’s portfolio, such as Adam Internet, Internode and Westnet.

While iiNet has built its business on providing strong customer service in the market, TPG’s model is one of low cost (it excels at this) and this is essential within the often dire economic situation of the telecommunications infrastructure market.

From a customer perspective it makes sense to maintain the iiNet brand but the reality is that the choice for customers is becoming thinner. If iiNet stops being the customers’ champion what choice do customers have? Is Telstra or Optus any better?

The negative element of this deal is the obvious depletion of competition and choice for Australian customers.

TPG and the NBN

It’s also interesting to consider the NBN in this respect. What is the advantage of a large company here? Telcos in general have been notoriously poor in building value-added services. What we are seeing, both on fixed and mobile networks, is that the new business models of the over-the-top content (OTT) players are the winners in the retail markets.

The NBN provides a wholesale platform where smaller, more focused players, get a more or less equal chance to win customers. So if companies such as TPG, Optus and Telstra don’t lift their game in this market, many of the 40 or so smaller players will benefit from the churn that will occur when people move to the NBN.

However the trend relates even more to the arrival of a whole new range of players, who will be using telecoms as a platform for their own products and services, whether they are autonomous cars, smart metres, home automation, white goods, smart toothbrushes or payment facilities.

So the general trend here is that telcos will increasingly be pushed back into a wholesale business model, unless they get serious about beating the OTT players.

Another interesting aspect of the merger is the continued decline in the number of backhaul providers, as we move back into excessive market concentration in Australia’s fixed broadband market.

This will have a dramatic effect on the provision of backhaul to the 121 POIs (points of interconnect) of the NBN. As I argued back in 2012, it was a big mistake for the ACCC to give in to Telstra and Optus’s wishes to increase these POIs from 6 to 121 since it limited the possibility for smaller players to tap directly into the NBN. Now these service providers have to either build a network to all those 121 POIs – which, of course, nobody is doing – or they have to use the services of the backhaul providers, and with that number of players dwindling, guess what happens to the pricing of these services!

Obviously Telstra and Optus knew at that time that this market would eventually consolidate and – together with TPG – they now enjoy a huge competitive advantage. This industry consolidation has not stopped yet. Optus will also need to step in and  ‘eat or be eaten’ would be the operative message here.

The company recently mentioned its poor performance in the fixed broadband market and the need for it to lift its game; merging with TPG would be the only serious option here. Meanwhile, Melbourne-based M2 Group is another company that looks ripe for the picking.

In my past discussions with the Australian Competition and Consumer Commission (ACCC) on the ramifications of backhaul industry concentration, the regulator had indicated that in case of excessive concentration it would have other tools to regulate that market. That scenario has now been realised and let’s see if the issue pops up as the ACCC reviews the merger.

Interestingly, this also throws a spanner in the works of those who – mainly for ideological reasons – argue that there should be more infrastructure-based competition. Every single industry move over the last decade has been in the direction of consolidation, with little or no new infrastructure players entering the market – either in Australia or any other developed economy.

This is an edited version of a post originally published on March 13. Paul Budde is the managing director of BuddeComm, an independent telecommunications research and consultancy company, which includes 45 national and international researchers in 15 countries.